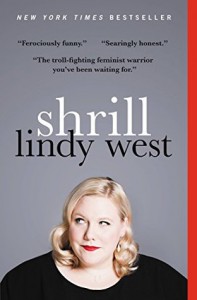 It seems like every woman I know has read this book, which automatically made me suspicious. (I still haven't forgiven my fellow females for The Bridges of Madison County.) I finally trundled forth on my own.

I'm glad I did. It just took me a while to get there. I wasn't sure what I was headed into. I figured "feminist, fat-positive, intersectionality" and that's all true. But are these essays? Not exactly. What was I reading? I finally settled on memoir-ish. It took me a while to finish this because I ended up with a ton of notes scribbled on my notebook, and I spent a lot of time reading about the surrounding circumstances. I honestly didn't have to. She explained these things well and even quotes huge chunks of some pieces. (One thing I learned: Leonard Nimoy is a photographer!)

The reason I'm going on about this is that the beginning of the book is witty. It's written like essays, even if it's about being a child, a fat child, a fantasist child... This doesn't feel like a true memoir until the very final few chapters, and those are beautiful chapters -- written with a vulnerability that I found very relatable and touching. There is true wisdom in the final handful of chapters that don't feel like I'm being Taught A Lesson because she shows us her experience and her vulnerability as she learns.

Earlier chapters are hilarious. The end of the book still has laugh aloud moments, but it's on a much deeper level. She's finally let the reader in. I wish she could've found a way to let me in earlier. Much of the fat-positive stuff felt very defensive. (Full disclosure: I, too, am overweight, and I can attest to the different way society at large treats fat people because I was pretty thin until I hit 40.) Despite my sympathetic ear, it still came off to me as defensive. The "lessons" she tries to impart early about the way we treat fat people finally get an "aha" moment in the latter chapters when she describes her marriage and the circumstances around her engagement. Here, she's open and honest. We get to see behind the activist into the real woman.

Interestingly, I found something at odds between her feminism and her fat positivity in these latter chapters. It's not glaring, and I certainly don't fault her for wanting to be desirable to her husband and show the world that he desires her, but the tension of being a woman shows up here. It brings up an even deeper set of issues for women that she doesn't touch. I don't fault her at all for that -- this is not an academic study.

It's hard being a woman. I know this. And I don't even have an army of trolls attacking me on a daily basis (see https://jezebel.com/if-comedy-has-no-lady-problem-why-am-i-getting-so-many-511214385 )

I'm slightly older than Lindy West. I grew up a decade or so before her. When I was growing up, it was assumed that because the world now said the "right" things, all was now fine, much like the "post-racial" nonsense that went around in 2008. It's bullshit, but I believed it as a girl, and that's brought me some real anger in adulthood. It's made me a pretty ardent feminist. This is where I've learned from women like Lindy West - how to be unapologetic about my feminism, including my anger.

This book didn't change my life, and I doubt it will change anyone else's. Nonetheless, West has a real point about chipping away at the old truisms and making the world a little better with our every interaction.

This is a pretty wise young woman, and it'll be great fun to watch her and read her in the future. Rumor has it that she has two more books in the works.