All about Unruly Women 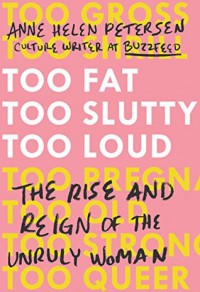 This one is hard to review. It is divided into 10 sections, each naming a typical gender "problem" (like "too loud") and a famous woman representing someone who gets called out for that "problem" in the media and culture. Add opening and closing chapters that highlight the sometimes-trouble women who refuse to stay in the box cause for everyone, including many other women. Some are much better than others. I also found some things just missing, most importantly "too intelligent." In fact, the whole thing is much too centered on body issues and I find that there are at least as many stereotypical "problems" in the intellectual area. Part of the reason may, in fact, be the author's age (young) and her pop-culture background (she's a BuzzFeed writer.) As I said, within those ten chapters many only look at the issue in terms of women's bodies, and of course our bodies get attention in all of the chapters. I would have liked to see more about our minds or even better -- the way attention to our bodies gets in the way of realistic evaluation of our minds. That last one is a big quibble for me, but putting that aside there were some excellent chapters in this book.

Aside: I started to take notes on this book during the introduction, and I needed a title for said notes, so without much thought I quickly called it "too female." I wasn't trying to be clever, but by the end of the book, I realized my shortcut was precise. We are problematic because of our gender. This is a terrifying thought. More terrifying is the many women who are quick to force any of us back into our boxes when we get TOO anything (unruly is the word chosen for this,) and this book shows us ten stereotyped gender "norms" broken and ten women who have paid the price for breaking them at the same time they are celebrated for doing exactly that. In other words, we can't win? It shows us how each woman at times has sought the easier way by crawling back into the box, being a "good girl" and in turn getting praise and relief. How very sad for humanity that culture can only handle us when we're acting a certain way -- unobtrusive and obedient.

My favorite chapters were Too Loud: Jennifer Weiner and Too Strong: Serena Williams. Both chapters could be spun off into books of their own. Not necessarily all about those two women, but those two gendered "problems" for men, with the "too loud" chapter focusing on all women (Serena Williams has been called out for being too loud many times and in many ways) and a particular focus on the way society looks at black female bodies when they are "too strong." The dichotomy there is inane -- we have made magical negroes of many strong black women (SBWs, as we say in my house,) yet we don't want these women to be *too* strong. These two chapters alone are worth the whole book.

Same things can be said for Too Fat (and I'd add Too Thin there as well) as well as Too Gross. Every single woman knows what it is to have a vagina. Most men have dealt with at least one of those if not more, so why on earth must we pretend that they don't exist? Why do we have to pretend they don't do what they do? Why do women pretend not to pass gas or relieve themselves? Why did I just type that phrase instead of "fart and shit?" All questions brought to a head in the Too Gross chapter. Most interesting there was the added layer of discomfort from women about a show where two women were friends without men somehow coming in to take precedence over the women. When it was being shopped, a woman actually didn't understand the concept and asked "why would anyone watch this? Are they going to get married?" How freaking scary!

Since I first wrote this last week, I've thought about the Too Fat chapter a bit. I think maybe McCarthy wasn't the right choice. She has not been unruly in any way beyond her weight. She has, the chapter points out, been quick to tame herself in myriad ways. So perhaps someone like Roxane Gay, Lindy West or another woman from the Fat Positive world would have been a better choice.

I could go on about any of the chapters mentioned above. They call into sharp focus the issues society slaps women down for again and again, and the careful way in which every woman sometimes has to side-step to get around her own personality, so she can continue to do what she loves.

More disappointing were Too Old: Madonna, which wasn't really about ageism more about Madonna trying to outrun her own age. I felt something akin to real snark in this chapter and thought it was an instance of a woman slapping down another woman for being the way she is. Why not simply find a woman that society has bucked because she got too old rather than pile on to the already large pile atop Madonna? Perhaps, again, this was the writer's age getting in the way of real understanding about aging as a woman in today's culture?

Also somewhat redundant to things already said and shown better were Too Pregnant: Kim Kardashian and Too Naked: Lena Dunham. Too Pregnant is most a rehash of Too Gross with a different person and Too Naked could be summed up by stating "Nudity is fine, so long as the men decide who gets nude in public." She tries to make some statements about nudity vs nakedness (and she puts this down to "body type" Dunham is naked b/c she's not shaped like nude people? How is that feminist or body positive?) She goes on the long thing that any woman knows: only recently in history and in the West have we decided thin is in, but it loses credibility pretty fast with me. None of it is wrong. All of it feels super-redundant after all the other body chapters we've had. We had too gross, too old, too fat...

Then we have just plain disappointing chapters: Too Queer: Caitlyn Jenner and Too Shrill: Hillary Clinton. The Clinton chapter was disappointing because it left out far too much and didn't feel like it encapsulated the actual issues with Hillary Clinton. Too Shrill is often the word used for intelligence or anger or a variety of other adjectives. She's certainly the best example of Too Shrill, but something was lacking here. It's a book-sized important problem, so maybe a single chapter was bound to leave something to be desired.

Too Queer was odd because why pick Caitlyn Jenner? Also because she picked Caitlyn Jenner, the only real point made was if you're already in a dominant, privileged position (rich, white, male) then you stay dominant and can miss a lot of the issues even after you've entered another position. OK, but certainly there are women who are called Too Queer and even some women who are queer who have done a lot to try to distract us from that. Caitlyn Jenner has not been smacked down in the way any of the other women in this book have. In fact, it seems almost the opposite, so why pick her?

All in all though, I liked this book. When it was good, it was very very good ;) It was interesting and thought-provoking, and it may get a larger audience because of the pop culture slant it's taken on these issues. She points to real problems in every chapter, whether they were better or worse, and it could serve as a starting point for many people, male and female, who don't realize how society wants women to stay quiet and obedient and pretty and nice. All in all a worthwhile read.