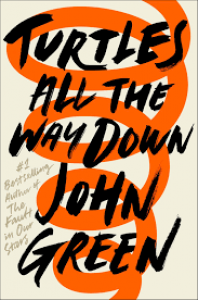 “Everyone wanted me to feed them that story—darkness to light, weakness to strength, broken to whole. I wanted it, too.” ― John Green, Turtles All the Way Down

If I was 14, I'd have adored this book and thought it was brilliant. I'm not, so it was not meant for me and that made it a bit harder to judge. I can only be me, so here goes:

Nicely, this book is NOT a well-worn yet unrealistic "moving story of courage and hope bringing darkness into light with a complete cure of mental illness along the way." It's NOT the perfect YA romance where everyone skips off to (somehow free?) college at the very best schools in the world while still maintaining their young romances. It's not a lot of clichés, but it contains others. The most favored quote at Goodreads is one that is well-worn in therapy circles ("Your now is not your forever.")

I'm not exactly sure what it IS, but I'm not entirely sure that matters. If pressed, I'd call it a mental health story, I guess.

The portrayal of mental illness was pleasantly realistic. Not debilitated a hundred percent of the time, the main character Aza Holmes manages to have good grades, friends, drive and not drool while still being under the care of meds and a shrink. But we still see her life disrupted by this illness. The hovering mom was a nice touch too.

The friendships seem real and very high school/teenaged. Intense and fun, silly and emotional - real. Also, I love the title. I hoped when we got to the reason for it, it might have a little more impact, but it worked well enough for me. There are added plot lines in this novel, but if you've read other John Green, you'll notice similarities between Aza and what is usually the male character (Quentin, Colin, or Miles) and find a bit of Margo, Alaska and/or Katherine in Davis Pickett.

These these teenagers also can quote poetry and literature while analyzing the nature of self within the universe. Even now I don't possess the presence to have Edna St. Vincent Millay tripping off my tongue whilst on a date. The teenage romance was realistic in all but the way they wrapped it up -- which again reminds me of John Green. I can't get mad at an author for writing what he always writes. Do I wish he'd stretch a bit more over these many years? Of course, but I knew this was his book when I opened it.

Back to the romance: teenagers are usually known for their hormones and the ability of said hormones to make them emotional wrecks. Our main teenagers are nothing like that. They are more adult about romance than many adult divorcing couples I've known through the years (c.f. Paper Towns.)

“...no one ever says good-bye unless they want to see you again.”
― John Green, Turtles All the Way Down

Somewhat odd for Mr. Green, there is a loose mystery that could have worked if the extent of it wasn't internet searches. It served as a device to get Aza and Daisy on the same ground with Davis, and give Davis something about which to be wistful and brooding. All of which needed to happen for this book to be...this book, but it is hard not to see it as purely a way to give a leg up to other themes. As it is, there's a half-baked mystery hanging around the edges of a YA philosophical think-piece.

For me Daisy Ramirez nearly steals the show. As irritating as she could possibly be, she's probably annoying because she's the most realistic teenager of the bunch. Everything about her is absurd, including her job, and because of that, she's pretty awesome. The only thing that made me want to kill the author was the use of "Holmesy" as her moniker for Aza in literally every single conversation they had -- often multiple times. It's way too close to "homie" though it's probably a nod to Sherlock given that half-baked mystery I just mentioned. There's something weird about making a character with a Latino-sounding name the poor kid who uses something too close to street slang and exists as as a side-kick to the main WASP that doesn't sit well with me, but I loved Daisy nonetheless.

All in all I liked this but it didn't blow my skirt up. It wasn't as good as I had hoped (yet another reason to wait many years before reading books with buzz.) It wasn't bad. I'm glad I own a copy on audio because that will make it easier to revisit on a long drive someday, and I have a few younger people in my family who will enjoy listening to it.