Is Steinhauer trying to do Dostoyevsky? Dunno, but it kept me turning the pages 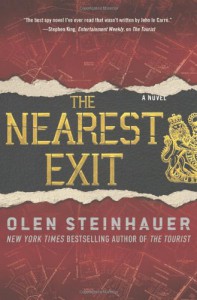 What a mess of a plot, with a mess of a bunch of people, running around in a mess of an agency with the messiest morals imaginable. It's so much like the US I know and love that it's almost like real life.

Dostoevsky asked a lot about lying to oneself, peace and justice in The Brothers Karamazov. Here Olen Steinhauer visits a lot of those same topics in a rather pulpy espionage novel. He even centers his second installation in Milo Weaver's story with a similar question to the one Ivan asks Alyosha, "Imagine that you are creating a fabric of human destiny with the object of making men happy in the end, giving them peace and rest at last, but that it was essential and inevitable to torture to death only one tiny creature - [a child.]"

That's the big question of this book. We learn very early on that Milo has been asked to murder a young girl, and we spend the novel trying to figure out why - was the reason "just" or not, is it ever "just" to kill (especially a child) and what exactly is justice, who is the arbiter? Writers much better than Steinhauer for all time have tried to answer these questions. We're not getting the answer in a spy novel.

It's been a while since I read The Brothers, but Milo is at least as tortured at times as any Russian character. He just deals with it in very different ways. There are many other similarities, and that's kind of hilarious at the same time it's true. For instance, can Milo be with his wife and child while he's still a Tourist? Dostoyevsky said, “One can fall in love and still hate.” He also said, “Above all, don't lie to yourself. The man who lies to himself and listens to his own lie comes to a point that he cannot distinguish the truth within him, or around him, and so loses all respect for himself and for others. And having no respect he ceases to love.”

And that's Milo's central struggle. He's constantly lying to the woman and child he professes to love and lying most of all to himself. He swears for two books now that he's leaving the Dept of Tourism, but he noticeably has not left, despite all the consequences he and his loved ones have faced because of his work. This one reaches high, but doesn't always meet its mark.

Honestly, I have no idea how to review this second book. There's something absurd about the lofty ideals of this man, Milo Weaver, who keeps doing the same thing expecting different results, but I still like him despite myself. The only thing I know is that there is a third, and I will read it. I'm hoping that means Milo will be around for it, though honestly, I am not entirely sure because it seems Olen Steinhauer is more than happy to kill off, or seemingly kill off, just about anyone. That's what makes me turn the pages.

It's not a masterpiece. This is a book to be read on a rainy sunday snuggled under a blanket to give my brain a break, which is why those idealistic Dostoyevskian questions don't all belong in one volume of this type. Nonetheless it held my interest, and that's really all I expected.