The Fact of a Body: Writers gonna write 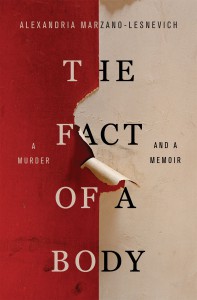 Except, no. She can't. She doesn't. She doesn't even continue law school, where she had wanted to be since childhood. This is the memoir of a woman finding out about herself using a (dead) child's story to do so.

Interestingly, the book is being marketed as a mystery and the author believes there was a mystery. See this Goodreads question:

Q) What mystery in your own life could be a plot for a book?

A) Alexandria Marzano-Lesnevich: This question made me laugh, because, well-- the one in THE FACT OF A BODY!

But there is no mystery. There is no actual trial. She opens boxes, goes on trips and searches for evidence, but she finds nothing pertinent. Moreover, she has always known about the abuse she frames as her own "mystery," whether she chose to deal with it or not. The murder is long-solved, the confession came very swiftly after Jeremy Guillory's murder, and the trial for his murder, like every single thing involved in the book ended long before the first chapter starts.

Her main point seems to be that people aren't all good or all bad, and we all bring our own lenses to every human interaction. "He’ll never be all one thing or the other. Only a story can be that. Never a person." These are very valid points, if not new or bookworthy. This was a cathartic experience for the author. She is a writer, so she uses her strength for her own healing. Everyone has the right to write their story. But as someone recently reminded me, once it's out there and I've paid for it, I don't owe any author a good review. Moreover, as a therapist and a fellow abuse survivor, I'm over these "love my book because I'm brave enough to tell you about abuse." Well, the statistic is startling. If we all wrote books, we'd have run out of trees soon after the printing press was invented.

What we have are many stories she attempts to weave into a coherent narrative. The author's story is the main focus. It's the memoir of an abused child coming to grips with her past. Very straightforward. The catalyst for her finally deciding to deal with her past is the man who confessed to murdering Jeremy Guillory. Either story would have done better on its own. I felt like she drew all sorts of connections where none exist.

I'm all for using whatever device one needs to use to begin to heal after trauma. Writers gonna write. The bells and whistles got in the way, and sadly many of them are human beings. Poor Jeremy Guillory gets short shrift in this memoir. He is a murdered child used as writing device. We know nearly nothing about that child at the end of the book. We know only sad little facts about his dead body.

At times the prose gets precariously close to purple, but it's not the writing that bothered me as much as us never getting to truly know the memoirist or anyone else. She deals with facts like a lawyer, and it creates distance in a story that cannot afford any. More difficult to overlook is creating a story for public consumption and doing self-therapy all at once, using a dead child and his family to make it seem like so much more than it is.