What the F -- loads of fun for the whole office 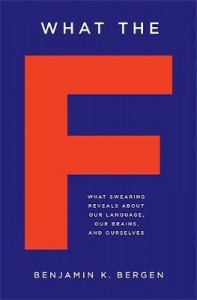 I've always wondered why giving someone "the bird" in England requires two fingers and in the US only one. I worry that someday I'll accidentally make a peace sign in the wrong country, so I keep my hands out of it. Now I can be a tad less worried because I know how to swear in quite a few countries both with my mouth and my hands! This book has been a great highlight of my office over the last few weeks -- so much so that I renewed it from the library so we could continue our studies. We may be boring old science types, but we can curse with the best of 'em.

Which word is most offensive? In various studies, it's always the same. (You'll have to look it up.) He not only reminds us the Pope swore during his weekly address but points out the double bind this lands the Church in. It's juicy: either the Pope is fallible, or he meant to say "in this f-ing..." As great as an admission of fallibility would be, it's even better to imagine that he meant to swear. And does anyone know my grade school principal, Sister Maria Virginia? Because she owes me back some detention hours either way.

We all know swearing has been around, so instead of history he gives us specific cases including Jacques Lordat, a French neuroscientist born in the 1700s. Lordat was the precursor to Jill Bolte Taylor (My Stroke of Insight: A Brain Scientist's Personal Journey.) He wrote of his own stroke and went on to greatly further the field by dedicating his life to the study of brain injury. Lordat brings us the rather tragic case of a parish priest who also had a stroke but was able to say only two words after. One of those words started with an F and was a word so scandalous it wasn't included in dictionaries or Lordat's report. (Not the English F-word. This can get very confusing.)

He dares to bring up the precious children everyone is always protecting and a whole host of ideas, science and thoughts about language and the way swearing affects each of us and society overall. A good and fun, if not mandatory or clean, read.