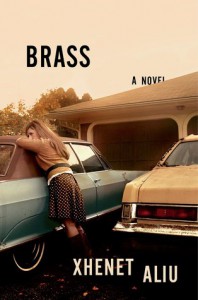 Xhenet Aliu's bio: A native of Waterbury, Connecticut, she was born to an Albanian father and a Lithuanian American mother. She now lives in Athens, Georgia, and works as an academic librarian.

Strangely enough, this book is about Elsie Kuzavinas and her daughter Luljeta (also her sister -- a librarian, and Elsie's mother.) Elsie is the child of Lithuanian-American immigrants who live in Waterbury, Connecticut. She works at the Betsy Ross Diner (which, like all good American diners, is Greek) and harbors vague dreams of becoming a dental hygienist. At the diner she meets Bashkim, an Albanian line cook. Elsie hears what she wants to hear and eventually ends up pregnant. She and Bashkim have a daughter - Luljeta.

Yet another alternating chapter book. This time we get both alternating characters and timelines: mother followed daughter throughout. (Have I entered a special circle of hell?) The writing is often beautiful. The story is believable and complex. There is so much to like about this one, and I had no trouble zipping through it. I waited to rate it because something didn't sit right with me. I wanted to like it more than I actually did.

So I'll examine what held me back. But know - this is a very worthwhile and promising debut. I have a feeling the great bits may be more true to the author than the parts that rang slightly off to me, but that's pure conjecture. (She promises her mother that the book is for her, but not about her.)

Somehow these characters didn't fit their own story. This family of single women who have made it on their own together for generations and are too close yet so separate is moving, but somehow our main dyad are naive to so much. Elsie and Luljeta have uniquely strange blind spots.

Their actions don't match their wit. They can be blue collar without being absurdly naive. Unsophisticated is one thing; stupid is very different. These two think with sharp minds, then act like they're missing a synapse.

Luljeta's chapters start off better than Elsie's. It took me a while to warm to Elsie. Meanwhile though, I cooled on Luljeta. Some moments are breathtaking in their realism. I could see Elsie's internal struggle. I felt Luljeta's rage and panic, but I never warmed entirely to either one. Perhaps it was the curse of alternating stories: we see actions and don't get to know enough internal life, especially Elsie's. Some things that seem normal feel ugly in this book because there is just something missing.

I wanted to love BRASS. I have been waiting for this one for ages. I'm more than a bit sad that it was just an OK read, but I will return to it, since I own a copy, later - after the curse of alternating chapters has passed. Maybe I'll find something I missed the first time round. Maybe it was just a case of wrong time for this book.