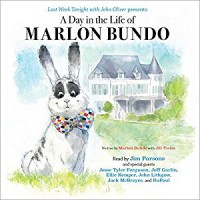 I now own three copies: one hardcover, one kindle and one audio - which is completely lovely and well worth the donation (ALL PROCEEDS GO TO CHARITY!) After reading and listening to the audio, I've ordered 5 more copies for children I know. It's a very appropriate children's book.

Common Sense Media, an independent non-profit organization helping parents make media choices for their children, gave the book a four star rating and considers it appropriate for children of four years and older, giving it its highest marks for "positive messages" and "positive role models and representations."

Written by Jill Twiss (with an assist from Marlon Bundo) and illustrated by EG Keller (aka Gerald Kelley) about, well... a in the life of Marlon Bundo, the real-life rabbit of the Pence family. You might know the Pence family because their dad is Mike: Vice President of the United States.

The pictures are really adorable and it's actually just a very lovely story about everyone being different and that's awesome. Also, it's nice to hop together rather than alone. And animals make a perfect bridal party -- I learned a lot!

In the audio version Jim Parsons plays Marlon Bundo, John Lithgow plays the evil stinkbug (not too scary for kids, but scary enough) and tons of other lovely voice acting in this short children's book from the likes of Jesse Tyler Ferguson, Jeff Garlin, Ellie Kemper, Jack McBrayer, and RuPaul!

More info on just the book, if you want it: https://youtu.be/rs2RlZQVXBU?t=14m7s