Rainbirds - psychological book about grief and family with a haunting atmosphere 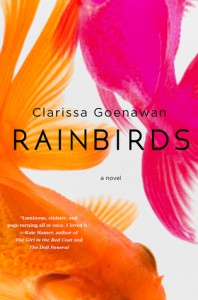 A family falling apart at the seams, held together and pushed apart by secrets and a chill between parents who don't speak to each other or their children left Ren Ishido and his sister Keiko raising themselves and each other. Keiko disappeared once when Ren was a child, and now she has disappeared permanently - murdered in the small town of Akakawa where she taught at a local cram school.

Ren goes to Akakawa deal with the funeral and closing down his sister's affairs. He would like the local police to solve his sister's murder, but they don't get a lot of practice and he doesn't have much faith in their ability or will to solve it. Right away, Ren learns that his sister may be different than he'd imagined from their weekly phone calls. Before long Ren has put his life and graduate school in Tokyo on hold to take over his sister's job and room and possibly life in Akakawa. Slowly and somewhat haphazardly he unravels Keiko's, his family's and the town's long-held secrets in an effort to find the sister he lost.

This is a beautiful psychological book about grief and family with a haunting presence throughout. The atmosphere is positively alive while reading it, making it hard to put down or shake off easily. Ren is haunted by his dreams and I was too! There is suspense, but it's not at all your average whodunnit or even primarily a mystery. If I'd gone in with expectations of a mystery, I would be let down. As it was, I was happy to find a little mystery wrapped in a family story. Who did it is secondary to the portrayal of family and a young man dealing with his isolation, remembering things, misremembering, always reaching out to the sister he wishes he'd known better during her life.

A melancholy portrayal of grief that is also funny, even scandalous at times, with a mystery in the midst of it. With all of the emotions that attend sudden/violent death, Ishido possesses a certain charming grace. I could physically feel the rain in this book, the atmosphere was so thick. So be on the lookout for more from Clarissa Goenawan. RAINBIRDS is an affecting debut that should interest both suspense lovers as well as family saga readers.