What Happened -- too many facts, not enough Hillary 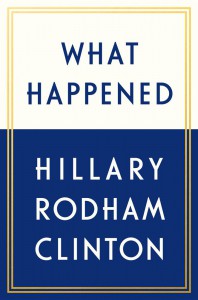 I bought this a while ago. I was a Clinton supporter. (I have always loved Bernie Sanders and voted for him in the primary, but by the time it got to my state, it didn't matter, and I happily took time off to campaign for Hillary once that was settled.) I strongly believe she got short shrift in the election coverage, and I was too upset until recently to be able to read this. (I actually think my diving into fiction may be a direct result of the 2016 election. I find I am too angry to be functional if I read too much news or even too much political fiction/nonfiction.)

While I agree in large part with most of her points about "what happened," I didn't learn much new from this book. I was very touched by her clear adoration for her daughter and her grandchildren, and it is clear that the loss of her mother is still very painful. Some of those chapters are wonderful. I could have lived without an exact play-by-play explainer on every issue on the election. I lived through it and experienced it once. I wanted to know how she felt about these things. The cover promises she's going to tell us, but I didn't get any real insight to Hillary Clinton. Thought she didn't say it this way, I also enjoyed how clearly pissed off she is at Comey - still. Also that she was confused by his actions like the rest of us were. I would say 70% of the book is defensive crouch. I get it, but it may just have been too soon for me even now. I never will need to read an in depth explainer on the emails though -- I doubt anyone reading this book will. Those who read Hillary's book are likely to have understood the email situation LONG before the election and frankly, long before the NYTimes stopped harping about them. (Guess what - reading the apologies and "we'll do better" from the Times didn't make me feel better either - particularly since they've now done away with the Public Editor who was the one clear-headed person at the paper...)

I moved to this book because I found my blood boiling at Susan Bordo's feminist coverage in The Destruction of Hillary Clinton (though I will make myself read that because I really want to) and decided to put that one down in favor of reading the candidate's take. I've liked Clinton's earlier books, and like many women I've admired liked Hillary Clinton for years. I respect her, but this book was uneven. Clearly she was very hurt and angry, like the rest of us. When she's down, Hillary argues her case. It's just that I've heard that case before, and I hoped for a more personal look in this book, like promised. I wonder if anyone could write a clear-eyed book about this election, but Hillary and I can't.