“It is so easy for humans to be cruel, and they leap to it. They love to do it. It is an exercise of all their laughable powers.”

Jesse Ball's writing has always fascinated me. I first knew him as a poet and I don't have a ton of faith in poets becoming novelists. (I've missed some good novels, but I've missed more bad ones.) So imagine my delight when his first novel, Samedi the Deafness gave me literal thrills. I foisted it upon so many people that year...and I don't think anyone has read their copy yet. Idiots. Since then he's been very productive - a new work nearly every year, experimental but readable, and always interesting. His experiments don't interfere - instead they seem to be a way of getting exactly to the core of the story. Where other experimental writers carve curlicue apple peels for our delight, Ball cores an apple to show us the seed.

So here we are at his latest Census, which came about in different way than many novels. Jesse Ball had a big brother named Abram who lived with Downs Syndrome. Ball always imagined being with Abram, as a child even imagined how to navigate dating and finding a woman who would understand/accept that Abram was a part of their lives. Sadly, Abram died years ago, and Ball wanted to write a book about his brother and their relationship without ... writing a book about his brother.

So Ball worked from a child with Down Syndrome and fit a book around that character. What we end up with is Census: the story of a widower with a son who has Down Syndrome. The book starts as the father gets a fatal prognosis from his doctor. He decides the way to carry out his days is to see the country with his son, so he signs up to be a census taker, and the two of them set out on a road trip across a nameless country to gather the data from people in towns named for letters of the alphabet while spending this last time together.

They start in the beginning (A) and travel alphabetically. Soon we realize this census is different from any census we know. Rather than an external record, each participant gets tattooed on a rib to prove they've taken part, and rather than just facts, he's looking for what's special or unique about the people he counts, so the census takes time with each person as he listens to their stories. This allows time for each town and the citizens in it to respond and react to this interesting census duo, and it allows the loving father to reminisce on his life, his family and his son - sharing stories of his previous work, his life, his own family and very poignantly his wife, a famous performance artist/clown. In these memories we find all the light that the bones of the book need for balance.

Some of the towns are welcoming, allowing them easily into their homes and workplaces. Because the son wants to go to every single house, the father creates a sort of game where he's allowed to pick. One day he picks a house they've visited previously, but a deal's a deal, so up they go, and the couple doesn't say a word about them having done every single thing just a day or so earlier. One man allows the son to hang out in his workshop while the father covers the rest of the town. Along the line they meet another family with a Downs girl,and the mother recognizes in the father all the love and respect she feels for her daughter.

“...I have come to see that he who looks too hard for any particular thing, though he may find it, will certainly miss the most wondrous and strange things he passes, though they stare him in the face.”

Not all the towns are so welcoming. As they get further into the alphabet, the towns are more sparsely populated and the people much more wary. While the terrain gets more difficult, so does the inner "journey" because as they approach the end of the country (Z), the father, nearing the end of his life, has to confront the best way to say goodbye to his beloved son. He worries about his son's future (though he did provide, early on, for the care of his son.) He also has questions about the purpose of the census itself.

We are mostly in the father's head as he narrates their travels, it's through his eyes that we know the son. We hear how people meet or refuse to meet his son, we see hostility and kindness. Best of all, we get to see the boy's unbridled joy and excitement with things people who perceive life differently might not find so endlessly fascinating. I've known people who live with big differences, and the most heartbreaking part for me is always the way the world treats these human beings. Jesse Ball's touch is never maudlin or strident, and he doesn't preach. Instead he shows us how prejudice actually robs that person of a whole range of experiences. The lesson is never stated, but it's clear that the people who laugh at, recoil from or can't even recognize his son are so much poorer for their lack of imagination, decency, kindness and subtlety. As the book goes along, it's hard not to question the idea of "normal" and pack mentality, the strictures many of us enforce as "grown-ups." But he rarely comes close to stating these things. They would be easy to miss.

“I have always despised people who join societies. In general, I feel that groups of any kind are for the weak. The need for consensus is the most disgusting and pathetic aspect of our human world. Is there none who can simply wander alone beneath a sort of cloth tent painted with dreams?”

While the world it's set in is very ordered, gray and different from ours, Census isn't a dystopian story. It's a profound lesson on love, grief, belonging, conformity, decency and humanity. 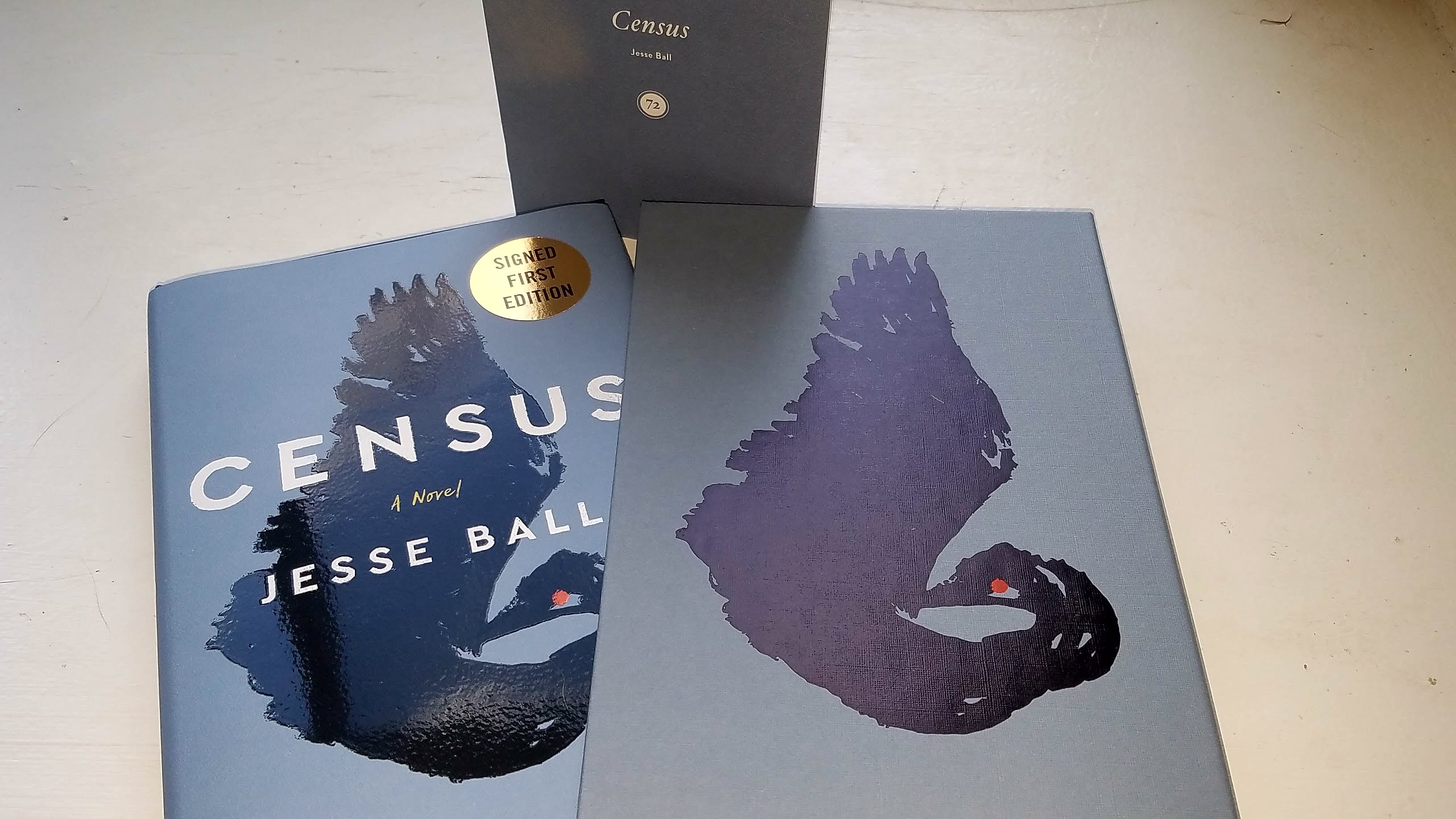 What NOT to do with a signed first edition:

put a giant cheap gold sticker saying "signed first edition" on a hardcover book that has its own sleeve. But even if it was written on a rock, this would be a great book.