Less - The Horrors of Turning Fifty 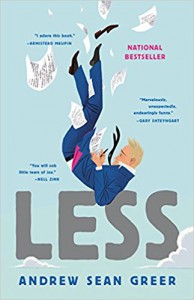 What a delightful book! I will definitely read this again, just because I have a feeling there are things I missed this time. It may be one of those books that's actually better once you know the ending. Dunno - I will figure that out later. Meanwhile...

The tone is so waggish that hefty subjects get piled one on top of the other, yet it never feels like reading a heavyweight book. There were several times when I didn't just laugh, but laughed so loudly that I shocked myself. I mean like Ha!!! really loudly! The writing feels just perfect, but never twee or overdone.

I was drawn to this, not because it's about a writer, but because I'm very in touch with the horror that befalls a single person on the dawn of fifty -- it ain't pretty. Less is so on target about this, despite the hugely different circumstances between me and our protagonist, that at times it was a relief to know I've already lived through the horror and will never have to do it again. (For anyone who hasn't gone through it, the second you embrace the new decade, it's just fine. Remind me of this when I'm about to do 60 and 70 please.) Arthus Less is a very lucky guy, despite his complete unwillingness to see that. (Honestly, if writers are this self-pitying, I'm very glad I only read them rather than hanging out with them. When a woman tells Mr. Less that nobody will feel sorry for his protagonist - gay or not - I nodded right along with her.)

It's OK that Arthur Less is so absurd and pathetic - because we all are, deep down. And because we're dealt a narrator whose treatment of the protagonist is both hilarious and kind. That's a rare thing, and it's a good read. There were some things that I saw coming and that made it a bit less magical. One question I have is how this rose above so many other novels to win the Pulitzer. It didn't feel like a particularly "important" book, which is probably why I enjoyed it so much.