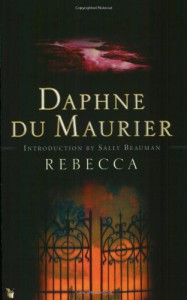 I've never read this before, nor have I seen the movie. Not sure how I missed the film, but I did. I was shocked at all the psychological twisty, rather deep and dark Freudian/Jungian stuff found in this novel. I mean, I knew it was a classic and sort of an intertext-something (I really should take a class on how to read a novel) to Jane Eyre, but I'm almost shocked at how affecting this novel was for me..

Oddly this is the second book in a row that seems to be a callback or response to another classic novel. I just finished a 2017 "response" (I'd call it) to the Great Gatsby (No One Is Coming to Save Us by Stephanie Powell Watts), and today I read Rebecca which is certainly a fierce response or some better word to Jane Eyre. Both novels stand very firmly on their own. They didn't need the other books, but it's incredibly interesting to see how they respond to some of the material in the earlier classics. If I have the time, someday, I'm going to take a class on how to explain myself better about books. Back to Rebecca...

Normally a simpering woman who is dying for a man to just sweep her away from it all (no matter when it was written) would turn me off. The fact that she's afraid to trouble him or speak up to him makes sense, but also made me very sad for her at first. The genius is though I kept thinking "pack it up. Leave him," I felt connected to the nameless narrator through the novel as if I was the one in her position. I felt stuck. I felt nervous. I cringed along with her. I found my pulse quickening every time Mrs. Danvers came near. I was scared - literally scared while reading this in the middle of the day.

The dreams that begin and end the book are stunning in the way they set the mood and tell the truth when our narrator can't seem to tell herself the truth. Her daydreams are full of fanciful, childish nattering, but the dreams are the real thing. The juxtaposition of the truth in her dreams v the silliness of her daydreams is very telling and full of foreboding. Du Maurier writes very melodramatic plot without ever tipping into sentimental or soggy language so well that it's almost easy to miss how melodramatic the plot actually is. She's also a master of class and all those games people play, which is a callback to Jane Eyre, but so much of this is in the narrator's fearful mind that it's wildly different from the actual scenes in Jane Eyre.

I also think the nameless narrator is a perfect way to add one more layer of her personality -- added to her hair, the way she dresses, all of her hiding, acquiescing, nail biting, her class and the way they met -- this is a well-built and very believable character. The daydreaming tops it off for me. She can't deal with her life and shunts all of her wishes and fears into fantasy.

One more thought is that these women - the two Mrs. de Winters - are like two sides of the same person, and in the end de Winter manages to kill them both (and they're both willing to let him.) Sure, the narrator is technically still alive, but it's just a slower/different form of death. There's a lot to say about that from the world of psychobabble, but I'll spare us all.

My final thought was "did Sylvia Plath love this novel?" I don't know, but in her late (mostly Ariel-era) poems, there's a lot  that has the feel (and some of the imagery) of this novel. I tried to do a quick search, but all I learned is that Agatha Christie wrote to du Maurier about the nameless narrator.

Anyway, I loved it. It moved me. I'm not sure what I learned but if I'd gotten a degree in psychoanalysis, I would have wanted to use this as some part of my dissertation: especially in the responses of women to the women in the novel.